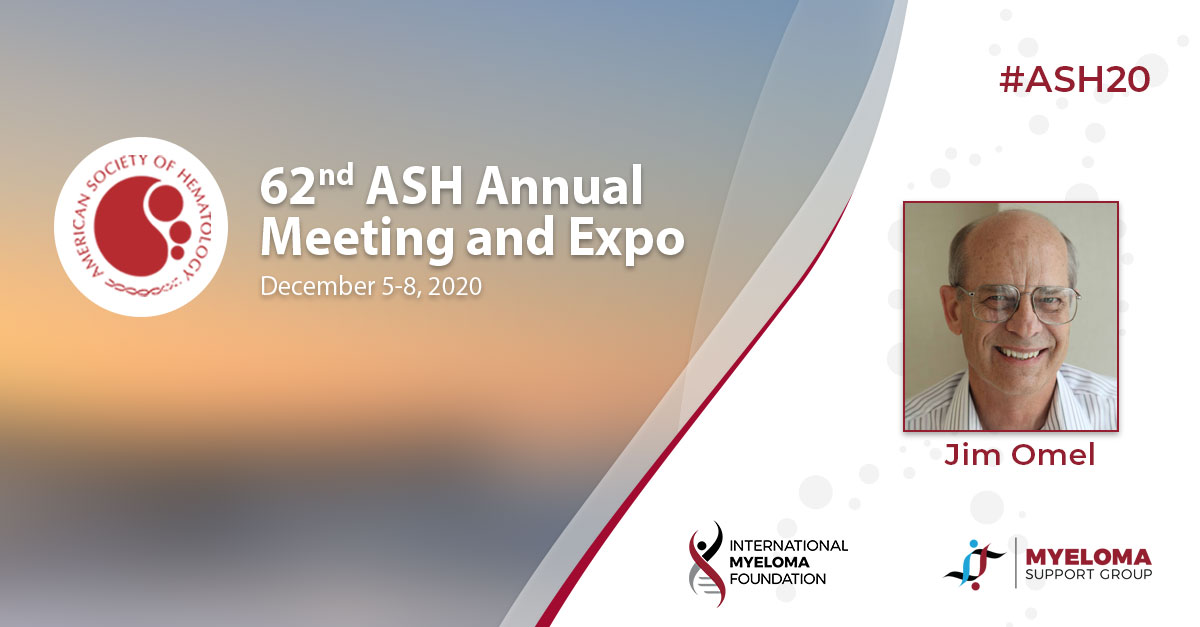 As I write this, the USA has surpassed 3,100 COVID deaths in one day. This horrendous reality now means more Americans die each day than were lost on 9/11/2001. Many more of us die each day than Dec 7, 1941 Pearl Harbor day. We now sadly lose nearly the same number of dead Americans every day as the worst day of carnage of the civil war at bloody Antietam, or the slaughter on the worst day at Gettysburg, the turning point of that terrible war. Throw in racial unrest and class division, and Time Magazine’s cover now appropriately proclaims “2020 The Worst year Ever”.

ASH20 however was a brightly glowing light in the darkness at the end of this sad year. Held each December, ASH is a gathering of roughly 30,000 people from around the world which highlights whatever is important in hematology. We learn updated clinical trial results, FDA approvals, and hopeful treatments on the horizon for multiple myeloma. Like so many other meetings in 2020 ASH was totally virtual. The skeptic in me thought they could not pull it off, but it worked! Nearly every session which I had hoped to ‘attend’ was accessible, and after the meeting I can slowly review and electronically ‘attend’ those I missed or wanted to see again. Virtual ASH was a success! Our little group of IMF Support Group Leaders attending and reporting from ASH was just as busy as if we were in San Diego catching our shuttle busses or hurriedly scurrying to the next venue two buildings away. By Monday afternoon Cindy said her “brain was fried”, a sentiment we all understood. We missed the “relax and show up in your most comfortable clothes” pizza and beer party in Robin and Michael’s hotel room at the Monday night IMWG Conference ASH wrap-up, but were able to see it virtually on Tuesday morning instead. We couldn’t sit back and watch Yelak make it all work on the hotel TV, but the meeting links were live and Drs. Durie, Martin, Mateos, and Mikhael did a great job summarizing myeloma highlights presented at ASH. If you have not watched the IMWG Conference Series from ASH yet, please do so.

Each year seems to be ‘the year of immunology’ for myeloma at ASH and 2020 was no exception. An ADC (antibody drug conjugate) combining a BCMA-targeting monoclonal antibody with a myeloma cell killing drug was approved by FDA this year. Blenrep has significant activity in relapsed patients whose myeloma is resistant to other treatments. It has a unique but manageable toxicity which affects the cornea of the eye, a most unusual side effect compared to other myeloma treatments.

CAR-T therapy continues to generate the excitement we felt at ASH19.  Updates of CARTITUDE (“CAR T with an attitude”) clinical trial showed outstanding effectiveness and durability. These immunotherapies will be even more efficacious as they are moved closer to first line therapy. Immunotherapy needs a target on the myeloma cell, one which is not highly expressed on normal healthy cells.  BCMA is by far the most attractive of these targets, but two other myeloma cell surface markers were described this year at ASH. This is incredibly important because BCMA, whose protein expression is located on the short (P) arm of Chromosome 16, can be lost if both allele copies are lost or mutated. Our immunotherapy is so dependent on BCMA that the title of Abstract #721 is chilling (Biallelic Loss of BCMA Triggers Resistance to Anti-BCMA CAR T Cell Therapy in Multiple Myeloma).  Dr. Adam Cohen discussed a different myeloma cell surface target (FcRH5) in oral abstract #292, and Dr. Aji Chari outlined a bispecific targeting GPRC5D. His abstract #290 described Talquetamab which has shown a 70% response rate.

Controversies in myeloma therapy continue every year as myeloma specialists debate the importance of stem cell transplant. Abstract #143 evaluated early versus late auto transplant in NDMM (newly diagnosed multiple myeloma). It reported the IFM 2009 trial shows similar overall survival after 8 years follow up between early vs. delayed transplant. Other important debates centered on maintenance therapy, triplet vs quad therapy, and which treatments should be used front line. When should Daratumumab be used? Front line? Kept in reserve? Dr. Tom Martin made his fellow panelists smile when he cleverly said one of the important questions of the day regarding Daratumumab therapy is “To D or not to D……that is the question”.

Even though it was virtual, ASH was a lot of work; it was also rewarding. Partnering with my fellow Support Group Leaders also made it a lot of fun. All of us are grateful for the pharma support to the IMF which made our six days of work (Thursday through Tuesday) possible. Our collective hundreds of tweets were liked and re-tweeted on Twitter. I especially liked one by a respected transplant specialist, Dr. Navneet Majhil, who commented on the unique special bond between dedicated myeloma patients and myeloma specialists.